Introduction of The Happiness Hypothesis by Jonathan Haidt

In his widely praised book, award-winning psychologist Jonathan Haidt examines the world's philosophical wisdom through the lens of psychological science, showing how a deeper understanding of enduring maxims-like Do unto others as you would have others do unto you, or What doesn't kill you makes you stronger-can enrich and even transform our lives.
This is a book about ten great ideas. Each chapter is an attempt to savor one idea that has been discovered by several of the world's civilizations - to question it scientifically and to extract from it the lessons that apply to our modern lives. Jonathan Haidt skillfully combines two genres#151; philosophical wisdom and scientific research#151; delighting the reader with surprising insights.
He explains, for example, why we have such difficulty controlling ourselves and sticking to our plans; why no achievement brings lasting happiness, yet a few changes in your life can have profound effects, and why even confirmed atheists experience spiritual elevation. In a stunning final chapter, Haidt addresses the grand question "How can I live a meaningful life?" offering an original answer that draws on the rich inspiration of both philosophy and science.

Jonathan Haidt is the Thomas Cooley Professor of Ethical Leadership at New York University's Stern School of Business. He received his Ph.D. in social psychology from the University of Pennsylvania in 1992 and then did post-doctoral research at the University of Chicago and in Orissa, India. He taught at the University of Virginia for 16 years, where he conducted the research reported in The Righteous Mind.

The widely accepted view is that once income reaches a certain level (about $70,000 a year in the US), money can't buy happiness. However, some researchers are now finding that the correlation between happiness and income is larger than we used to think. Although the absolute level of income is not very important, the increase in prestige and the respect that radiates in the eyes of others is important, so is a success, whether it brings you wealth or not. Finally, wealth itself has multiple conflicting effects: it sometimes destroys relationships, while those who earn wealth through hard work (as opposed to winning the lottery) gain respect from those around them, which leads to greater happiness. -- Quoted from page 1 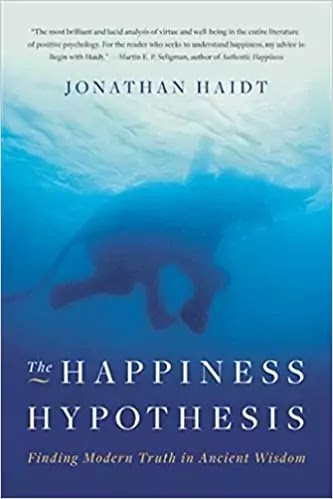 Buy from Amazon
Buy from Bookshop.org

Summary of “The Happiness Hypothesis”

I love truth and like to read books of various disciplines, science, philosophy, religion, and can think and absorb nutrients from different perspectives.
I came across this book at a time when I had probably explored various fields. After reading it, I feel that, compared with the excellent books I have read before, this book has complex contents and unclear viewpoints. The author just collected a little knowledge of different disciplines and did not form his own unique opinion. Let me sort it out below.

In the first chapter, the split self,

The author mentions Plato and Freud, which draws out the thinking about "I" from the previous philosophical level.
Then start turning to science.
Begin to give an example of human physiology, how nerves affect us. Split-brain people, perceptual and rational brain mechanisms - frontal cortex, people with brain damage and loss of emotions, control, and automation, why it is difficult for us to persuade others.
These examples are mainly meant to illustrate - we are brain-controlled creatures.
Tucao: There are so many examples, but no clear arguments, arguments, and arguments. Just like when we were writing essays when we were young, we found a bunch of examples to make up an essay. I now understand how the teacher felt when he changed his composition. . .
Regarding the knowledge of neuroscience and brain science, it will be clearer to read other related books, such as "Why Gorillas are Smarter than Experts", this book is very similar to the content of this book, but the explanation is clearer than this book.

mainly analyzes why people are affected by negative emotions and trains the correct way of thinking.
Like the Scale - Instinct to distinguish the good from the bad
Negative bias - a negative effect is five times the positive effect
How to change your emotional style

Cognitive-behavioral therapy is so successful because it teaches riders how to train elephants, rather than just reasoning with them and defeating them. Over time, the patient learns several psychological skills: questioning the original automatic thinking process and going out to buy a newspaper when he can't make up his mind, instead of lying in bed all day long thinking. This can be considered homework, to be done every day. Only by changing the process of automated thinking bit by bit can you change your emotional style in the process. (Practice)

’s lifelong habit disappeared overnight (after taking Prozac for 5 weeks)
This part of the content actually uses cognitive psychology to explain the emotional style. point of view, but the explanation is not clear enough, it is recommended to read "Analysis of Emotions". At the operational level, three methods are introduced, which are not detailed. Those who are interested can read books on meditation and books on cognitive behavioral therapy.

Chapter 3, The Instinct of Reciprocity

This part is actually the point of view of evolutionary psychology. There are also a lot of examples there, mixed with some evolutionary neural mechanisms.

It is recommended to read the fourth chapter of "Evolutionary Psychology". I think it is a bunch of examples + Buddhist viewpoints (no distinction).
When it comes to Buddhism, every chapter in this book will introduce a little bit of Buddhism, but the author doesn't know much about Buddhism. biased.
For the cause of our self-righteous faults, I recommend Who Will Admit It Wrong.

Happiness is where positive psychology comes in.
Happiness Equation: H=S+C+V
(H=the happiness we really feel, S=hereditary, C=living conditions, V=spontaneous activities we engage in) Competent, extremely challenging job. This is what people call "inside the realm", "flow of the heart".
Pleasure Hypothesis - Becomes the Equation: Pleasure comes from the inside as well as from the outside. To live a life of yin and yang harmony, we need guidance. With regard to yin, the Buddha has given the most insightful guidance: the Buddha constantly and gently reminds us of the importance of yin, the introspective practice.
But I believe that the pursuit of action, struggle, and passion in the West is not as wrong as the Buddha said. What we need is to find the balance (Eastern wisdom), to find a clear direction of struggle (modern psychology). Recommend Martin Seligman, the father of positive psychology.

of "True Happiness", which talks about love and attachment a lot. In short, it is the attachment theory in developmental psychology.
Then discussed love.
In this part, there is a psychological theory about love, which is relatively systematic - Sternberg's love triangle theory.

The Best Times of Adversity and Adversity sums it up well.
To maximize the benefits of adversity in life:

Virtue, This is where I get the dizziest.
The reason is that there have been countless discussions on virtue since ancient times, and there is no unified answer to this topic in the philosophical world. I didn't come up with my own opinion.
As for the latter, the religious and scientific circles are mixed. . . Can you analyze section by section from an angle??
Also, what is the final conclusion? Where does virtue come from? Why do we seek virtue? Is there a scientific basis for virtue?
On this topic, either ethics, sociology, religion, or the latest research results in cognitive neuroscience and evolutionary psychology.

the holy, beginning of the "Flat Earth" example is quite interesting.
However, later have to impose the example of "disgusting" to demonstrate the sacred? Are the people in the slums not holy? There is a story in Buddhism. Some people call the Zen master a piece of shit. The Zen master says that what is in your heart is what the outside world is. . Obviously the author's Taoism is not much higher than this scolding person. . It takes so much space to talk about it and the argumentation process is very nonsense. . .
Later, when I talked about the sense of improvement and mysterious experience, I quoted neurology and brain science, so that people can understand what the author is talking about.
The ego is a great obstacle to spiritual advancement. The conclusion is that there is, however, the argumentation process is equally ambiguous. It is recommended to read Krishnamurti's book, although his book is also subjective truth, it is very enlightening. If you want to know what the "self" is, it is recommended to read the explanation given by cognitive neuroscience.

The Meaning of Life
1. Where do people come from?
2. How can we find meaning in life?
3. Feel the love and work of life itself
The author's conclusion is to fully engage and experience flow.
God made us become a hive religion, which reduces the influence of individual selection theory and strengthens the power of group selection theory.
To sum up, the author wants to say that the meaning of life is to live happily, how can we live happily? To "forget me". How to "forget me"? One, religion, and two, devotion to love and work.
To sum up, the golden mean
is to find the wisdom of life, regardless of past or present, east or west, conservative and free, to find the happiness, satisfaction, and meaning of life.
After reading this book, I didn't gain much. I may have read a lot of books, and this book is mixed and shallow. The above is my reading guide for you, I hope it helps.

Book Review of The Happiness Hypothesis