Science fiction is a genre that has long fascinated people. In the fields of visual arts, but above all in literature and the media, it deals with topics that play out in their layout in clearly spatially and temporally staggered conditions. The future, with its assumed possibilities, inventions and developments is always a core part of the stories. 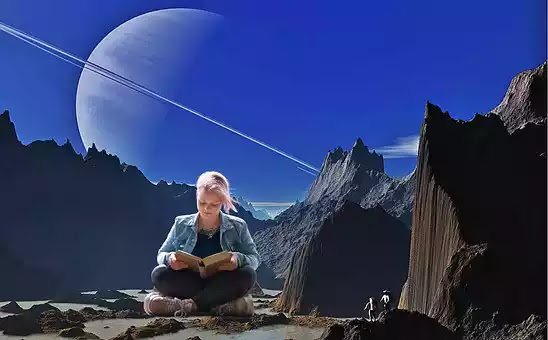 The fantasy genre is mainly defined by the fact that its worlds are rooted in myths and legends. When you hear the term, you think of giants, dwarves, oarks, and trolls. By far the best-known novel of this genre is Tolkien's The Lord of the Rings, which was also made into a very successful film. But are there any other fantasy genres? then what do we associate The Lord of the Rings with? Yes, there is one that is known from another series of films but is mostly mistakenly viewed as science fiction.

May the force be with you!

Science Fantasy is the name of the genre, which is not so well known as a term but is extremely popular. The Star Wars film series and the entire franchise marketed under the name are the most successful of all time. The Star Wars adventures are not, as is generally believed, to be assigned to science fiction, but to the mixed genre of the science fantasy genre. Science fiction defines itself, among other things, in that it creates temporally or spatially distant constellations of speculative possibilities that would be scientifically or technically possible. The technology in the stories of the Star Trek series has always been a believable future version of today's technology. In Star Wars, on the other hand, there is no such reference to our reality.

The origins of science fiction

Science fiction as we understand it today only emerged with the emergence of science and technology. When the telescope was developed and used to observe the moon, the idea of ​​traveling to the moon came up, for example. Johannes Kepler and Cyrano de Bergerac wrote the first stories on this subject in the 17th century.
In the next century, they were followed by Voltaire, among others, with a novel about space travel. In the 19th century, Julius von Voss wrote a novel that was set in the 21st century and which dealt with cultural and military developments, such as general social security or weapons of mass destruction.
In 1877 the Italian Schiaparelli published that he had discovered the so-called Martian canals. From now on the hypothesis was discussed, whether Mars is inhabited. For a long time, the term Martian was often used as a synonym for extraterrestrials.
Authors such as Nathaniel Hawthorne, Edgar Allan Poe, Nathaniel Hawthorne, and ETA Hoffmann made use of the new topics and created the pioneers of today's science fiction books.