Book Review of Gone with the Wind by Margaret Mitchell.
The only novel ever published by American female writer Margaret Mitchell is "Gone with the Wind".
Since the novel came out in 1936, it has been selling well, not only in the United States but also in the whole world by readers. It is now recognized as a classic romance novel with the background of the American Civil War.
The novel uses Atlanta and a nearby plantation as the story scene, depicting the life of American Southerners before and after the Civil War. The work portrays the images of many southerners of that era, and the central characters Scarlett, Reid, Ashley, Melanie, and others are typical representatives.
Their customs, manners, words and deeds, spiritual concepts, political attitudes, and even their clothing, etc., are all described in great detail in the novel. It can be said that the novel successfully reproduced the social life in this area of the southern United States at that time.
Gone with the Wind (Paperback)
The most attractive part of the novel is Scarlett's personality and her love story. Her love is not full of poetic and romantic sentiment, but realistic and utilitarian. In order to achieve her goal, she even used deceptive tricks. So why is her love story so fascinating?
The reason is simple, this is true. It is a real situation that is completely possible under the scenario set in the novel. The real thing may not be sublime, but it is closer to people's lives and therefore more popular with readers. Scarlett first fell in love with Ashley, but he heard the news of Ashley's engagement in his population.
Confident and smart Scarlett decided to confess to Ashley before the wedding, but Ashley gently and tactfully refused. When Scarlett was most depressed, she discovered that her conversation with Ashley was overheard by a man Rhett. 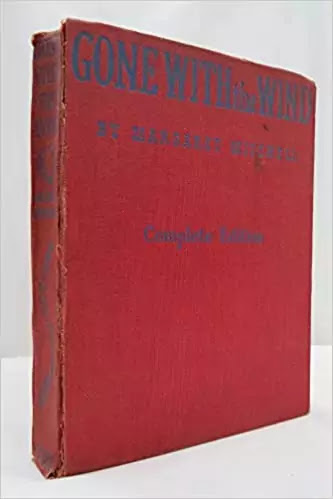 About the Author: Margaret Mitchell

Mitchell (Margaret Mitchell, 1900-1949) American female writer. Born in Atlanta, Georgia, in the southern United States. His father was a lawyer and was the president of the Atlanta Historical Society.
Mitchell studied at Washington Theological Seminary and Smith College in Massachusetts. After that, she worked as a reporter for the local newspaper "Atlanta". He married John March in 1925, resigned after marriage, and devoted himself to writing.
Mitchell only published the masterpiece "Gone with the Wind" in his life. She began to work hard to create "Gone with the Wind" in 1926. Ten years later, the work came out and it caused a strong response as soon as it was published.
Because of his family's influence, Mitchell has a keen interest in American history, especially the history of the American South during the Civil War. She heard a lot of anecdotes and rumors about the civil war and post-war reconstruction period in her hometown, and contacted and read a lot of books about the civil war.
She grew up in the southern city of Atlanta since she was a child, and she was fascinated by the customs of the southern United States. The natural environment and social environment here have become the background and source of creation for Mitchell Vance's gallop.

Excerpts from the original text: Gone with the Wind

What I love is a fictional person of my own, a person who is lifeless like Mei Li. I made a beautiful dress and fell in love with it. When Asiri came over on horseback, he was so handsome and so different, so I just put on the clothes for him, whether it fits him or not. So I couldn't see his real appearance. In fact, what I have always loved is that suit, not him at all.—— Quoting from page 834

The first time I solemnly felt that the United States is a great country was when I finished reading this book. As the victorious North, unexpectedly allowed such a novel with a purely southern stance to become the number one masterpiece of the Civil War.
In the novel, the Northern Army burns, kills, humiliates, and plunders, the blacks are ungrateful, loitering after losing the white discipline, and molesting the white women, and the KKK rises up to resist and fight for their lives. At the age of 21, what was the experience of being subverted in history?
If you want me to recommend a romance novel, it is definitely this, the top romance novel, the author is quite capable of description, and the girl's heart flickers. It is said that Scarlett’s masterpiece made Rhode no longer love her at last.
I want to say that the two of them are destined enemies. They are similar but not complementary. Why did Rhett say that he did not consume his love for her? He was afraid When she knows her true heart, she will be controlled and played, so she would rather ridicule and tell Scarlett that he loves her.
This is the most unmanly thing about Perfect Reid. As a classic masterpiece, I think it's still a little bit worse. In the war and politics part, the author's personal emotions are too much, and it suddenly feels very weak.

Gone with the Wind Book Reviews

Reading notes: Gone with the Wind

Page 850 Chapter 47
When Rhett got what Scarlett said, "I still like you", his attitude became colder.
Don't you think that even if it is nonsense, you should say "Rhett, I love you"? It doesn't matter if you are not sincere. ----Quoted from Chapter 47
At first, it was Rhett who told Scarlett to tell the truth, but after learning of the result, he found that he was emotionally unacceptable. People who fall in love have a negative IQ, and Reid, who has always been romantic, is no exception. Warn the majority of compatriots to be cautious and then cautious when being frank and unfair to the other half.
However, it can be seen from this section that Rhett has completely fallen in love with Scarlett. Including that when Scarlett reminded Rhett of what Rhett had said before, Rhett said angrily, "I fucked said too much." I guess that when Rhett said those words before, he had not completely fallen in love,
so he felt that he could pick up and put down like other women, and wanted to leave room for himself. As the saying goes, "I have been in the flowers, and the leaves are not touched." body". As a result, I didn't expect it to be Scarlett's best reason to refuse love. It's really fooling people.
Click Here to Download the PDF version of Book Review: Gone with the Wind by Margaret Mitchell.
Next Post Previous Post
Book-Reviews