Introduction: The Exorcist: 40th Anniversary Edition by William Peter Blatty
The three words "Exorcist" can be found on every list related to "Classic + Horror"...
——————————
Seemingly being possessed by evil spirits for no reason, the twelve-year-old girl Lei Gan endured pain that ordinary people could not imagine. Her mother took her to search for various doctors, but her condition did not improve. The young Catholic Jesuit priest Callas was in danger and was ordered to join hands with the old exorcist Father Merlin to hold an exorcism ceremony for the young girl Regan.
However, the priest is also a mortal, and the lack of faith in Father Callas's heart caused a breach in his body, making him the target of evil spirits. The battle of faith about life and death is unfolding in the night fog. Can Father Callas resist the temptation of evil spirits? Can the old exorcist Father Merlin successfully dispel the evil spirits in the name of the Lord? Can the girl Regan regain her life? At the end of the novel, the author gave his answer; every reader will have his own answer.
——————————
"The Exorcist" was first published in 1971 and is one of the most controversial novels in history. It has been on the "New York Times" bestseller list for 57 weeks and ranked first for 17 consecutive weeks. The novel was put on the screen the second year after it was published. On the first day of the movie's release, fans of "The Exorcist" from various cities flocked to the theaters.
In Chicago, the enthusiastic crowd smashed the side door with hammers and rushed into the theater; in Kansas City, the police had to use tear gas to disperse the crowd trying to forcibly rush into the theater; in the face of the "exorcist phenomenon", the most famous in the United States News show host Walter Cronkite even spent ten minutes commenting on "The Exorcist." Now it seems that "The Exorcist" is not just a novel or a movie, but a milestone in the era.
——————————
All you who look to the Lord, take courage and strengthen your hearts.
——————————
Media and celebrity recommendations: 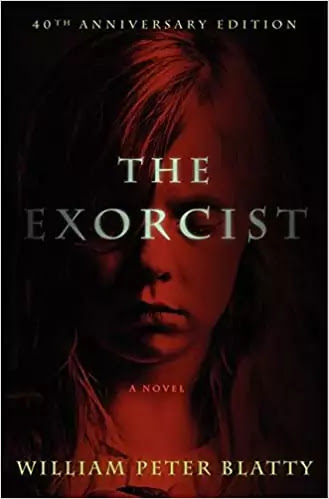 William Peter Blatty (William Peter Blatty, 1928— ), Oscar Award and Golden Globe Award Winner for Best Screenplay, Winner of the Horror Writers Association of America (HWA) Lifetime Achievement Award, "New York Times" bestseller Author.
Bratty was born in New York, USA, to both Lebanese parents. His father was a tailor in a clothing factory, and his mother was the niece of a Catholic bishop in Lebanon. The two later came to the United States on a cargo ship loaded with livestock. When Bratty was three years old, his father ran away from home. The poor mother took him to change dozens of residences because he couldn't pay the rent and led a life of displacement.
When he was a student, Brady lived on a scholarship and received a master's degree in English Literature from the University of Washington. After graduating, Bratty worked as a vacuum cleaner salesman, truck driver, and airline ticket attendant before enlisting in the U.S. Air Force. After retiring from the army, Bratty began to make literary creations but did not achieve much throughout the 1960s.
In 1971, his turnaround novel "The Exorcist", which was based on real and supernatural events, was published and caused a huge sensation in the United States. For a time, it also pushed Brady into the ranks of the top American writers. The novel was translated into many languages ​​and published worldwide.
Movies based on novels are also known as the most successful horror movies to date. In 1983, William Peter Bratty published the authentic sequel to the novel "The Exorcist", "The Demon", which was praised by readers as "a masterpiece 10 times more beautiful than the previous one", "a great story straight to the heart", and a genius writer. Another genius work of ".
In 1990, Bratty himself directed this sequel to the novel film, which also received overwhelming acclaim from the media.
Awards:

"Not at all, just right. Mary Joe was telling me that there was a Jesuit monk who was also a psychic."
"And he doesn't believe me!" The female psychic was still happy.
"Ah, distinguo," the provost corrected, "I just say it's hard to believe."
"You are talking about psychics, right?" Kris asked.
"What, of course," Mary Joe said, "what's the matter, he once floated!"
"Floating in the air, I have to float every morning." The Jesuit monk said calmly.
"Could it be that he still held a surrender meeting?" Chrissy asked Mrs. Palin.
"Well, yes," she replied, "he was very famous in the nineteenth century. In fact, he was probably the only wizard in that era who was not identified as a liar."
"As I said, he is not of the Jesuits." The dean expressed his opinion.
"Oh, my goodness, but he really is!" She laughed. "When he was twenty-two, he joined the Jesuits and vowed not to be a psychic again. As a result, he was expelled from France"-she laughed It's even more powerful--"Because he had a big séance in the Tuileries Garden. Know what he did? The séance was halfway, and he told the queen that she was about to be touched by a fully manifested spirit child. The people next to him suddenly lit up all the lights"—she couldn't breathe with laughter—"but found him sitting there with his bare feet on the queen's arm! God, can you imagine it!"
The Jesuit priest smiled and put down the plate. "Don't even think about discounts when you buy indulgences, Mary Joe."
"Oh, come here, who doesn't have one or two scum?"
"We are pushing the Medici III Pope Special Edition."
"Speaking of which, I once had an experience," Kris said.
The dean interrupted: "Aren't you going to confess?"
Chrissy smiled and said, "No, I am not a Catholic."
"Oh, yes, neither is the Jesuit." Mrs. Palin kept smiling.
"It's all rumors that Domin I will make," the dean retorted, and he continued to Chrissy, "I'm sorry, dear. You go on."—— Quoted from page 78

Excellent novels always allow people with different reading tastes to learn from it. If you like thriller themes, then "The Exorcist" will give you a thrilling reading experience. If you are interested in learning about Catholicism, then "The Exorcist" will provide you with a platform to lead you to observe religions and people who believe in religions up close. If you have heard about the "Exorcism Ceremony" and look forward to knowing more, then "The Exorcist" will be a work you can't miss.
The novel was published in 1971, and once it came out, it caused a huge sensation in the United States. It was adapted into a movie in 1973 and won the Academy Award for Best Mixing and Best Adapted Screenplay.
The novel is adapted from a true story that happened in the United States. The line of the story is very simple. The Hollywood star’s beloved daughter was possessed by a demon. After many medical treatments to no avail, she turned to the Jesuit priest for help. The process from asking for help to being rescued was thrilling and exciting. William Peter Bratty is truly a genius writer who deserves his name. His narrative can make reading a top enjoyment, with an adventurous mind and contemplation.
Speaking of exorcism, I have to mention a movie I once watched, "The Ceremony" starring Anthony Hopkins. After reading it late at night, I couldn't sleep for a long time. At the end of the movie, the young priest who has always been swaying about God and faith has to face Hopkins alone who is possessed by the devil. When the devil strangled his throat and forced him to believe in the real existence of the devil and succumb to Satan, the priest finally realized that he was fearless and resolutely expelled the demon from Hopkins' body.
The themes of the novel "The Exorcist" and the movie "The Ceremony" are all about Catholic exorcism rituals. But religion often cannot be an independent topic. The stories with religion as the origin are ultimately directed towards people themselves, including questions about people’s beliefs and emotional entanglements hidden deep in the soul.
Each of us has unspeakable fear and love in our hearts. This is true for the young priests in the movie, and the same is true for Father Callas in the novel. Even though they have joined Jesus, they are still no different from mortals. I still bear a heavy moral cross in my heart. They have unspeakable pain for family relationships, and often feel alienated and confused about their beliefs and careers.
All of these characteristics just show that even priests are human beings of flesh and blood, emotions and worries. All these characteristics point to love. Because of love, there are concerns and fears in the heart are formed. Fear and love are emotions that depend on human nature. They are cryptic and ashamed to be exposed to the sun, but they often torture our conscience.
When Father Callas finally confronted his fear and love, and desperately fought the devil in a desperate fight, he had already surpassed all doubts and entanglements, unconditionally believed in God, believed in love, performed his duties as a priest, and saved the enchanted At the same time, the ultimate self-salvation was completed.
Bratty’s novel starts from the story of exorcism, but its ultimate significance lies not only in the elimination of demons at the end of the story but also in deep thinking about humanity and love. From beginning to end, the novel does not directly explain the reasons for enchantment. I think the answer may be found in the dialogue between Father Merlin and Father Callas.
Father Merlin, an elder, said in the conversation with Father Callas: "The target of the devil is not the enchanted person, but the bystander. I think the meaning is to make us desperate and deny our own humanity... I think faith is fundamental. It has nothing to do with reason, but with love." "I tend to enchant in small things. It's like unreasonable hatred and misunderstanding like cruel words occasionally leaked out when friends talk. It's like between lovers. This is enough. We don’t need Satan to start a war; what we initiate in a war...ourself..."
Sometimes, evil and sin are not external forces but originate from the depths of our own hearts. We have created evil, and we must also face and bear the bitter fruit. But at the same time, Father Merlin also said: "Evil is also a melting pot of good." Even if we are not priests or even religious, we who are born as humans must still face our fear and love, so that goodness always becomes The yardstick for measuring speech and behavior has become a powerful force for eliminating sins and practicing compassion.
I look forward to everyone who read "The Exorcist" can get more insights from this amazing and intense adventure.

The Exorcist Book Review and Analysis