Introduction  of The Great Crash 1929 by John Kenneth Galbraith
The Great Crash 1929 was written by the famous economist Galbraith, this concise but insightful historical work has been reprinted since its first edition. Some chapters of the book also vividly describe the prosperity before the Great Depression. The content of this book is graceful and witty and humorously lashes out at the mistakes made by some wise men and policies in the US financial sector.
Written by the famous economist Galbraith. Since its first edition in 1954, it has been continuously republished in 1955, 1961, 1972, 1979, 1988, and 1997. It is a model work frequently cited by academia and securities investment circles.
"The Atlantic Monthly Review" believes: "Economic literature is rarely known for its entertainment value, but this book does it. Galbraith's article is graceful and witty and humorously lashes out at some of the country’s financial sages and sages. Policy mistakes." 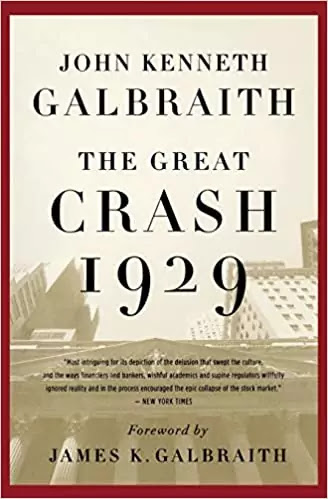 Excerpts from the original text: The Great Crash 1929

Every time the book is reprinted and sold in bookstores, it illustrates another speculative event—another bubble or ensuing disaster.
There is a basic cyclical process: it will repeat itself as the price of an item rises, whether it is stocks or real estate, artwork, or any other item.
Whenever the market is in chaos, we can always hear the same words: "The economic situation is basically healthy." Or simply "the basic situation is good." Whenever we hear such words, we should understand that something is not going well.—— Quoted from page 16
Another characteristic of speculative psychology is that, over time, people use value-added facts to explore the tendency to find out the cause is greatly weakened. As long as the number of people who buy for sale is provided for profit.
If the increase is sufficient to maintain the rate of price increase, people have no reason not to do so.
By the spring of 1926, the "supply" of new buyers absolutely necessary to maintain price increases began to lack stamina.
Even after the collapse of Florida's prosperity, Americans still have a growing belief that they can quickly get rich through the stock market effortlessly.
The funds made available by the Federal Reserve System to lose money are either invested in common stocks or helping others to finance the purchase of common stocks (and this is even more important).
The view that the actions taken by the Federal Reserve authorities in 1927 were the chief culprit in the subsequent speculation and stock market crash has never been truly shaken. The reason why this view is attractive is that it is easy to understand and excuses the American people and the American economy from all major guilt.
At the beginning of 1928, the nature of prosperity changed. People have become fanciful in order to escape reality, and uncontrolled speculation has really emerged in large numbers. As in all periods of speculation, people are not trying to believe the facts but looking for reasons to escape to a new dream world.
Wall Street's mechanism of separating speculative opportunities from unnecessary ownership returns and fees is original, precise, and attractive. Their purpose is to help speculators and facilitate speculation.
A securities broker loan, is, a loan that uses securities purchased by margin trading as collateral, and its scale is a good indicator of the scale of speculation.
One of the paradoxes of securities speculation is that loans used for securities speculation are the safest investment. They are secured by stocks and margins that can be liquidated at any time under any normal circumstances.
A few companies have made the decision: Instead of engaging in product production, to endure various troubles and inconveniences, it is better to release funds for speculation. More and more companies are beginning to lend their excess funds to Wall Street.—— Quoted from page 16

People of different countries, different backgrounds, and different mentalities have different answers.
The economist Galbraith, after carefully describing the various events that occurred in the United States and New York around 1929, categorized the unequal distribution of income, irrational corporate structure, irrational bank structure, problems with external revenue and expenditure, and poor economic knowledge. This is an explanation of the main reason for the New York stock market crash in 1929.
Regarding Galbraith’s explanation, I have to admit that I don’t have enough knowledge and information to make proper judgments. Perhaps, the analysis of the causes of the 1929 New York stock market crash and the Great Depression in the United States in the following decade should be based on a large number of studies of economic history and political history, and researchers should have relatively strong analytical capabilities. Moreover, you have to have a good sense, and even a little luck.
The real question is not why that happened at the time, but whether similar problems would still happen? When did it happen? Where did it happen?
There is no doubt that the five questions raised by Galbraith are of different degrees. However, excess liquidity, RMB appreciation, and global economic integration have made the real economy and capital markets more complicated. The high enthusiasm of investors can almost burn everything.
We are far from understanding the deep structure, operating mechanism, psychological process, and change trajectory of this society.

According to this book, the major reasons for the market crash in 1929 were technical because margin trading (interest rate 7-12%, Fed discount rate about 6%) grew too fast, and investment trusts (different from modern closed-end funds)
At that time, the managers of investment trusts were considered to have a significant ability to create value, so the value of investment trusts generally has a premium relative to the financial assets it invests in, rather than the usual discounts like the current closed-end funds).
The use of investment trusts (including the use of leveraged investment trusts to invest in leveraged investment trusts, resulting in accelerated leverage growth).
Previously, the United States was forced to cut interest rates to support the loose monetary policy brought about by the international market under international pressure, which encouraged speculation.
In the last chapter, the author further analyzed the deep-seated problems in the 1929 economy.
Including:
The serious imbalance of income distribution (which led to the economy being highly dependent on the luxury consumption and investment of the rich, both of which were affected by the stock market crash Larger, this is similar to Keynes’s analysis of investment volatility in The General Theory), corporate structure problems (mainly the proliferation of investment trusts), and bad banking structure (many small banks with insufficient anti-risk capabilities), Double external surplus (causing domestic funds to be flooded), and lack of economic theory (policy errors, emphasis on budget balance, fear of inflation during deflation).
Among these five factors, two, three, and four are no longer relevant to the current society, while one and five still have an impact on the 2008 financial crisis.
The 2008 financial crisis was to a large extent also the result of the intensification of the polarization between the rich and the poor and theoretical controversy still reappeared in the prescriptions prescribed after the 2008 crisis. The debate on austerity and interest rate hikes.
The market environment has changed a lot. In the 1920s, stock market manipulation was prevalent. It is written in the book that many bank presidents were involved in manipulating stocks, and even the chairman of the New York Stock Exchange was discovered after the crash. Manipulation of stocks, misappropriation of funds, and ruin.
After the crash, the United States made many legislative improvements in the supervision of stock markets and exchanges. Today, the U.S. stock market is one of the relatively most regulated markets in the world. How many years it will take for China to evolve to that day.
The stock market crash in 1929 did not mean that the stock market was over in one day, but that it had fallen continuously for 4 years, during which there were many rebounds, just as the stock market of a certain country can rebound from more than 1,670 points to 2,405 points.
The environment in 1929 is very different from the present. Now the reasons for the stock market decline are more diverse, but there is one thing that feels similar: the threat that many people face is that they know the situation is very bad and will continue to deteriorate, but they say it is basic" healthy".
Similarities before the crash:
United States: There are a large number of open optimists and their opinions are clear. "The world economy seems to be trending towards great development."
"Their unanimous judgment shows that the current stock price is not overvalued." "The stock price has reached a price with permanent high characteristics." Skeptics are a minority group, and journalists continue to receive remuneration from dealers.
A certain country:
CITIC Securities (600030) believes that in 2008, “the United States weakened in the first half of the year, but a certain country might be better”; China Merchants Securities said that the stock index reached 10,000 points, because labor productivity is high, so a certain country will have no problem, and it will open up along the bubble.
Company era; Guosen Securities is more simply speaking, technology is progressing, so export growth is supported; Shenyin Wanguo said that no matter what, the stock market in 2008 is not worried about lack of funds, so there is support, the famous analyst "spiritual leader" Gao Shanwen Said that 2008 is still the second half of the bull market.
Economic fundamentals:
The economy in 1929 was a myth in the United States: between 1919 and 1929,
It was not until 1937 that it returned to the level of 1929, and then it continued to decline. By 1941, it was still lower than the GDP of 1929.
In 2007, a country’s GOP growth rate was 11.9%, which was the fastest-growing year in more than 10 years; CPI was 4.8%; in early 2008, the Academy of Social Sciences released the Social Blue Book: The most difficult stage of employment has passed; the implementation of the new labor law.

Crashing (it is interesting to ignore it)

Experts from a certain country:

United States:
A certain country:? ?? Will it change the real estate industry? How big is the real estate bubble? Is the government the biggest real estate company?
It seems that the collapse is more caused by the accumulation of errors because people are lazy and unwilling to see In fact, you can only deceive yourself and others, and finally come to a breakdown and make a total correction.
After reading, the only conclusion is that the outbreak of economic crises in all countries has a common feature, that is, the polarization between the rich and the poor has reached a very serious degree. As a result, the part taken by the rich cannot support continued economic growth due to insufficient consumption.
After the economic crisis, economic institutions will make adjustments and the distribution structure will also be adjusted until this differentiation is relieved and the economy returns to the path of growth...A new cycle begins again!
However, when Galbraith finally analyzed the causes of the Great Depression caused by the Great Crash, he found it to be in the middle distance, "very unequal income distribution", "irrational corporate structure", "irrational bank structure", and "problematic external The "revenue and expenditure status" and "inefficient economic policies caused by poor economic knowledge" are the causes of the Great Depression that lasted for nearly eight years.
Next Post Previous Post
Book-Reviews