Introduction of  “Stress Test: Reflections on Financial Crises,” by Timothy F. Geithner
As president of the Federal Reserve Bank of New York and then as President Barack Obama's secretary of the Treasury, Timothy F. Geithner helped the United States navigate the worst financial crisis since the Great Depression, from boom to bust to rescue to recovery.
In a candid, riveting, and historically illuminating memoir, he takes readers behind the scenes of the crisis, explaining the hard choices and politically unpalatable decisions he made to repair a broken financial system and prevent the collapse of the Main Street economy.
This is the inside story of how a small group of policymakers—in a thick fog of uncertainty, with unimaginably high stakes—helped avoid a second depression but lost the American people doing it. The stress test is also a valuable guide to how governments can better manage financial crises because this one won't be the last.
Stress Test reveals a side of Secretary Geithner the public has never seen, starting with his childhood as an American abroad. He recounts his early days as a young Treasury official helping to fight the international financial crises of the 1990s, then describes what he saw, what he did, and what he missed at the New York Fed before the Wall Street boom went bust.
He takes readers inside the room as the crisis began, intensified, and burned out of control, discussing the most controversial episodes of his tenures at the New York Fed and the Treasury, including the rescue of Bear Stearns; the harrowing weekend when Lehman Brothers failed; the searing crucible of the AIG rescue as well as the furor over the firm's lavish bonuses; the battles inside the Obama administration over his widely criticized but ultimately successful plan to end the crisis; and the bracing fight for the most sweeping financial reforms in more than seventy years.
Secretary Geithner also describes the aftershocks of the crisis, including the administration's efforts to address high unemployment, a series of brutal political battles over deficits and debt, and the drama over Europe's repeated flirtations with the economic abyss.
Secretary Geithner is not a politician, but he has things to say about politics—the silliness, the nastiness, the toll it took on his family. But in the end, the Stress Test is a hopeful story about public service. In this revealing memoir, Tim Geithner explains how America withstood the ultimate stress test of its political and financial systems. 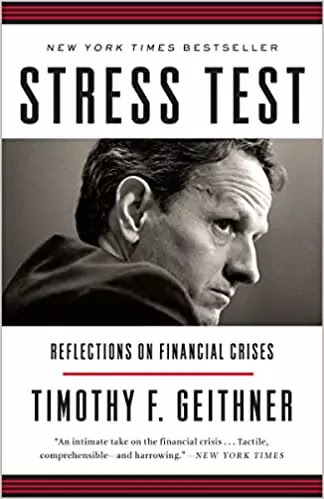 About the author - Timothy F. Geithner

Timothy F. Geithner is an American economist, the 75th Secretary of the U.S. Treasury Department, and the youngest Treasury secretary in U.S. history. He served as a research assistant to the former U.S. Secretary of State Kissinger.
He joined the U.S. Department of International Affairs in 1988. In the next 10 years, he served successively as Deputy Assistant Minister for International Monetary and Financial Policy, Assistant Minister for International Affairs, and Deputy Minister for International Affairs.
In 2002, he joined the American Institute of Foreign Affairs and became a senior researcher in the Department of International Economics. At the same time, he also serves as the head of the policy development and review department of the International Monetary Fund.
In October 2003, he was appointed Governor of the Federal Reserve Bank of New York. Before joining the New York Fed in 2003, Geithner served in the Treasury Department for three administrations and five Treasury secretaries. He was also employed by the former Secretary of State Kissinger’s private company "Kissinger Associates".
Geithner is an expert in dealing with financial crises. He has previously studied the Asian financial crisis and participated in the formulation of financial rescue plans in Mexico, Indonesia, South Korea, Brazil, and Thailand. He is incredibly sensitive to problems, and he can often quickly find the key points of the problem intuitively and overcome crises.
As Chairman of the Federal Reserve Bank of New York and Secretary of the Treasury of US President Barack Obama, Timothy F. Geithner helped the United States survive the worst financial crisis since the Great Depression.

Excerpt from a book: "Stress Test"

Most of the principles of an effective response to crises are counterintuitive. The more you promise to do, the less you have to do. If you take a great risk to exit the market, you will take a smaller risk of a huge loss, and you will attract more private funds to consolidate stability instead of requiring government funds. You should make more mistakes instead of less. You will make mistakes anyway, but you should try to make mistakes that can be corrected at a lower price. It is easier to curb economic panic than to deal with the aftermath of an economic disaster.—— Quoted from page 394

The latter part is too long-winded. The first part explains to readers from the perspective of the government why the government has made the decision not to save the Lehman brother. How to decide who to save or not to save? How much funding do I need to allocate? What are the consequences? The 2008 financial crisis was caused by the excessive borrowing of real estate.
The current economic boom has relaxed the policy, demand exceeds supply, debt is higher than assets, and the financial industry binds the chain. Every company should have enough cash reserve to buffer the storm that may occur in the worst period. Bank lending should do enough background credit investigations.
The public should make sure that the risks are bearable (sufficient income to invest). Pay monthly interest), take responsibility for your own words, and don’t publish information that can be devastating without investigating and thinking. Investment projects must do a good job of risk management, must ensure a stable cash flow and cash volume, and speak with data, the book is a good book!

If anyone in the world has the most say in the financial crisis, then Geithner is probably counted besides Bernanke. As a professional civil servant, few people have such a rich experience in dealing with crises--from working in the Ministry of Finance to handling international economic affairs and personally participating in the Mexican tequila crisis and the Asian financial crisis; to the New York Federal Reserve Board and witnessing the crisis.
The emergence collapsed, and the Minister of Finance was under the spotlight to design unprecedented relief measures. This book is a review, explanation, and reflection on his 25 years of experience after he stepped down as the Minister of Finance.
I read this book with gusto in 2 weeks. Although this book is not a novel at all, it has a novel appeal. I was taken into it to think: in the face of a crisis if it were me, what would I think and how would I do.
In the first half, Geithner described the situation in the U.S. market before the crisis and how the seeds of the crisis were planted. I have to say that I think the market at that time has an unusual similarity to the current one: low volatility, Complacency (Greenspan put ), chasing the yield
Stability can produce excessive confidence, which produces the seeds for future instability
In the second half of the book, Geithner mainly elaborated on his thinking model for formulating crisis response policies, and why some policies seem to be bail out the arsonist. Geithner believes that in the critical moment of crisis response, the moral hazard and the dogma of punishing sinners are Should be put aside, the first measure is to save the lack of confidence.
Every financial crisis is a crisis of confidence. Or apply the St Augustine Prayer he keeps quoting: Grant me chastity and continence, but not yet. Not yet. The most prosperous time of the crisis. We do need to control the deficit, but not when the current economy needs stimulus most.
I very much agree with Geithner’s response to the crisis. Although I was like many angry youths in 2008-2009, I thought why the U.S. government should save the culprits of those crises; and in 2011, I also believed that, like many Germans, Greece should get out of the eurozone.
But as I matured, I realized that those idealistic dogmas often came at a higher price. Those actions that are dressed in the cloak of justice, even if their purpose is completely just, but may not bring the justest result.
Finally, I want to talk about Geithner's criticism of politics. Throughout the book, Geithner has shown his aversion to Washington politics. In the last section of the book, he even said
"(The crisis) demanded the kind of response that democratic governments aren't built for-swift, consistent, coordinated action that prioritizes the desperate needs of the nation over the immediate demands of the public"
So in fact, Geithner is an elitist from the bottom of his heart. I actually agree with elitism, because the governance of the country and the economy is a difficult subject, and many of them are not easily understood by non-professionals, so trusting the nation to the trustworthy hands must be trusted.
But this does not mean that the democratic system is not important, because the democratic system just ensures that the trustworthy hands model can be elected. What we have to do is to design this system more efficiently.
In short, I strongly recommend this book. The book is full of subtle words and profound wisdom, and it is worth thinking about.