Introduction: Stephen king Carrie book review
Stephen King's legendary debut, about a teenage outcast and the revenge she enacts on her classmates.
Carrie White may have been unfashionable and unpopular, but she had a gift. Carrie could make things move by concentrating on them. A candle would fall. A door would lock. This was her power and her sin.
Then, an act of kindness, as spontaneous as the vicious taunts of her classmates, offered Carrie a chance to be normal and go to her senior prom. But another act--of ferocious cruelty--turned her gift into a weapon of horror and destruction that her classmates would never forget.
Carrie White is no ordinary girl.
Carrie White has a gift-the gift of telekinesis.
To be invited to Prom Night by Tommy Ross is a dream come true for Carrie-the first step towards social acceptance by her high school colleagues
But events will take a decidedly macabre turn on that horrifying and endless night as she is forced to exercise her terrible gift on the town that mocks and loathes her.
"Not since Dickens has a writer had so many readers by the throat...King's imagination is vast. He knows how to engage the deepest sympathies of his readers...one of the great storytellers of our time."---- Guardian
"A writer of excellence...King is one of the most fertile storytellers of the modern novel."---- The Sunday Times
"One of the few horror writers who can truly make the flesh creep"----- Sunday Express 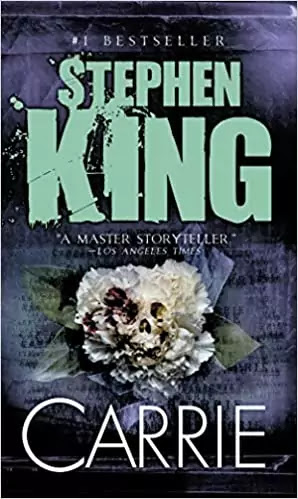 About the author Stephen King

Stephen King, one of the American novelists with the most readers and the greatest reputation in the world today. Born in Portland, Maine, the USA in 1947, he studied English Literature at Maine State University. In the mid-1970s, Stephen King rose to fame and was hailed as the "master of modern thriller novels" by the New York Times.
Since the 1980s, his works have always topped the list of bestsellers in the United States over the years, and his royalties have exceeded tens of millions of dollars. He won the Bram Stoker Award six times, the International Horror Literature Association Award six times, and the O. Henry Award in 1996. In 2003, he was awarded the Lifetime Achievement Award of the National Book Awards for "inheriting the great tradition of American literature of paying attention to plot and atmosphere, reflecting the beautiful and tragic moral truth deep in the human soul".
He was awarded the Allan Poe Master Award in 2007-Lifetime Achievement Award. He is known for his horror novels, which vividly summarizes the entire development of this type of novel. His works also include science fiction, fantasy novels, and other novel types. But his works are far beyond the category of genre novels. He is not a cheap wholesaler of horror. His works go deep into the heart, question humanity, and show the soul.
What it achieves is a true psychological thriller-he is a true man. Not a literary master. In the 30-year creative career of Stephen King, he has written more than 200 short stories and 40 books, which have been translated into 33 languages ​​and distributed to 35 countries, with a total of more than 300 million copies printed. What's more worth mentioning is that more than 70 movies and TV shows are based on his works, thus setting the Guinness World Record.

People don’t necessarily get better, but they become smarter. When you become smarter, you will continue to do things like breaking the wings of flies. You just figured out a better reason for doing this kind of thing.—— Quoted from page 78

The most important precaution for reading a story is to remember that you have nothing to do with the story, but this is what a good story destroys in the end.
In this more than 200-page novel, there is a sentence: "The eyes are the only part of her body that has not been completely dyed red."
The difference between a novel and life is that after all this has happened, the novel has only seventy-four pages after all. This story begins with a girl’s menarche and ends with a fire that almost burned the entire town. Of course, all this has never happened, no matter from which point of view. It may even be a conjecture of this girl in the novel, fortunately at least not in the novel.
I used to think that when I opened my debut work, I would get blood on my hands. After many disappointments, I no longer imagine it. But when I opened this Mr. Si's "debut" in a sense, I accidentally tasted the sweetness similar to menarche. The painstaking work of reading a writer is actually very close to the break. Whether there is a second time is really a matter of life and death for everyone.
This novel obviously belongs to the kind that can be "do it again". The novel chooses a closed town. The novel chooses a mother who feels that she is a serious disease of female genital organs, including pregnancy. The novel also selects a bunch of people who witness the misfortune of others but only laugh. In the end, these people almost all died. In this sense, I think this novel can be regarded as a happy ending.
This is a story about a child unless you have never experienced the stage when you are a child. No matter how far away you are at that stage, or in the middle of it;
this is a story about prejudice unless you have never been marginalized, never regarded as an outsider by a strange group. Unless you never feel about it.
The process of a person's growth is almost a process of constant contact with strangers. The path of the intestines where the pupa turns into a butterfly is full of doubts, crowding out, and hurting.
And the biggest harm is that "Where did you get this confidence" can be pupa turned into a butterfly, why can't you accept that you are a caterpillar for the rest of your life. In this way, when you want to insult someone, when you want to hurt, you can naturally accept that you are just a public spare tire. That is to say, the original intention of hurting and insulting a person to the point of being exhausted is often just idle or idle.
In the novel, the injury suffered by the girl along the way is characterized as "everything seems logical and inevitable", so that she can get used to it, so she can also deceive herself into believing that all people are inevitable.
What people have to learn is to get used to being isolated, excluded, hatred and insulted, and more importantly, they need to realize that passers-by who are paying attention to all of this will turn a blind eye to these, not just because they are commonplace, but because everyone is busy.
If this is not a novel but a life, then the years will really be quiet and sunny. It's a pity that this is a novel, but fortunately, this is a novel: "Suddenly, all of this and the overwhelming criticism have reached a critical point. The ultimate contempt, insult, and ridicule that have been sought for a long time have finally appeared. Fission." If you say Menarche is like breaking the seal, at this moment the little sister Jiali finally turned into a super demon.
"They want to extinguish my fire." At this time, the little girl doesn't care about "Her melancholy in an instant gives people the illusion of beauty." She will burn everyone's illusion with fire, the illusion that she can be bullied at will. . The novel depicts the scene of the massacre like a carnival: flesh and blood are flying, the fire is raging, no one can stay out of the matter, no one can just laugh at one side.
Something will always happen in the novel, unlike in life, it can only be the same in most cases.
Nothing in life is the same, and the story is never really irrelevant to the reader.