"The Shining by Stephen King book review" - Jack Torrance's new job at the Overlook Hotel is the perfect chance for a fresh start. As the off-season caretaker at the atmospheric old hotel, he'll have plenty of time to spend reconnecting with his family and working on his writing.
But as the harsh winter weather sets in, the idyllic location feels ever more remote... and more sinister. And the only one to notice the strange and terrible forces gathering around the Overlook is Danny Torrance, a uniquely gifted five-year-old.

The Shining by Stephen King 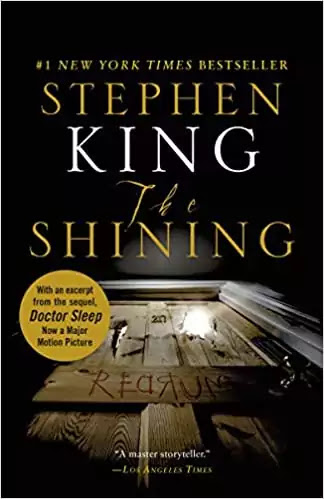 Stephen Edwin King was born the second son of Donald and Nellie Ruth Pillsbury King. After his father left them when Stephen was two, he and his older brother, David, were raised by his mother. Parts of his childhood were spent in Fort Wayne, Indiana, where his father's family was at the time, and in Stratford, Connecticut.
When Stephen was eleven, his mother brought her children back to Durham, Maine, for good. Her parents, Guy and Nellie Pillsbury had become incapacitated with old age, and Ruth King was persuaded by her sisters to take over their physical care them.
Other family members provided a small house in Durham and financial support. After Stephen's grandparents passed away, Mrs. King found work in the kitchens of Pineland, a nearby residential facility for the mentally challenged.

Danny was staring at her, maybe from the flustered expression on her face, he was forming his own view of the problem. She thought that to the children, the motives and behaviors of adults are as big and ominous as the monsters in the dark forest of shadows.—— Quoted from page 14

The first reaction after watching is that it is much better than the movie portrayal!!! Danny is the protagonist. The book also perfectly interprets the power of the shining, then Jack's own native family's trauma, and the accumulation of alcoholism and loss of control.
He has a weak shining ability and is completely controlled by Outlook. In fact, his favorite character is Wendy, which is really much better than in the movie. Calm and independent. Not as neurotic as in the movie. I feel that she is trying her best to maintain Jack’s marriage.
I refuse to be like a mother in my heart, and I feel that outlook is more magical in the novel. Since the Jack family entered the door, I never thought about letting them out...


Book Review & Analysis of The Shining